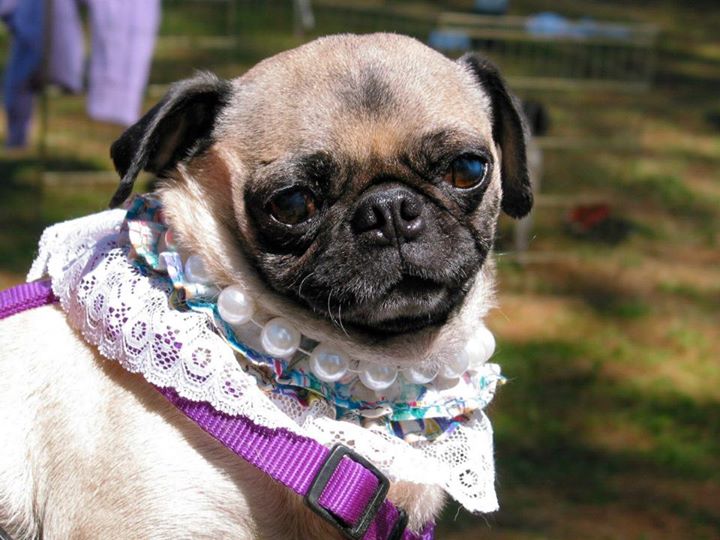 Hope. You have it in situations you can’t change. You look for it in rainbows after the darkest storm. You pray for it, wish for it, keep doing it, and try to spread it. Then you find it in ways that you could never have imagined. You grow to know what Hope is all about. I found what Hope really means when I rescued a little Pug, now known as Hope, eight months ago.

Hope was an owner surrender. The owners stated that she was fine until an incident where she apparently got out of her pen and ate fly bait. After that time she suffered an apparent stroke and was never able to walk straight, climb stairs or eat from a bowl. The owners never had her vet checked but just left her in her pen, throwing her food on the ground (they stated she ate it that way) and let her be. Then, she came into heat and it was time to do something. This was how I found out about her and immediately arranged to take Hope. At this point she did not even have a name… they had called her several things, but never decided on anything permanent. She had never been inside of a house in her entire life.

The owner met me on the side of a road and handed the little pug over to me. Her little head was shaking out of control, but she was so excited to have someone hold her. I put her immediately in a crate and headed for home. When I arrived at home and let her out, she flip-flopped back and forth like a fish out of water. Her bowel and bladder control were there, but her body shook so hard she stepped and fell in her “business” each time she went. Within one hour I took her to our vet, but I noticed a strange thing as I waited in the waiting room with this precious creature.

When I held her she become silent, she became calm, and she had this uncanny ability to look in my eyes and through my soul. That moment I committed myself to her future, and “Hope” had a name.

We were immediately referred to Auburn University’s neurological program who recommended that we do nothing but try and get Hope stronger for one month. They explained that if the condition (still unknown and not understood) was to worsen, it would indicate a terminal disorder. If she was the same, we were to take her in for an MRI and other testing. During the time we waited for our appointment, we began to discover how little things meant so much to Hope, and how we could make life so much easier for her. A harness became a must. She wore it almost continually and it provided her the much needed support to walk straight, urinate and defecate. If I hand-fed her she would crawl into my lap and lay down, completely relax and slowly eat her food. While drinking water was almost impossible, and she showed signs of almost continual dehydration, we decided to go the baby bottle route. She immediately took to it, and the tugging provided much needed strengthening of her neck muscles. I read, and read, surfed the internet almost continually, and we put Hope into a heavy rehab schedule. We started her walking up and down a slanted driveway twice a day, holding her in a baby pool, placing her on top of a kickball and rolling her back and forth. The progress was immediate. She could walk to one stair and pull herself up. This brought tears, and she was so proud. One month soon passed and we headed for Auburn with funds made available by generous donations of our rescue organization, and a lacy little collar around her neck made by a very special lady of a New Jersey rescue organization who wanted Hope to be dressed up for this special occasion.

Naturally, once the neurologists laid eyes on this little bundle of energy they understood why we were there. She immediately went for an MRI and spinal tap. The results showed a chronic condition, part of her cerebellum was damaged due to unknown causes. Most likely she was born with this condition, but symptoms did not become apparent until she reached her full growth. But, this was a chronic condition, would not worsen, she would not die from it, and she may even get better – not well, but better. They didn’t have to tell us that… Hope had already shown us that. The advice we received at Auburn University was to take her home, love her, continue her therapy, provide an environment that included other pets, and most of all let Hope be just what she is – a wonderful, beautiful, mischievous, bossy pug – and that is all we will ever ask for.

Yes, the care is hard at times. She had to be walked, and she had to be fed, and carried, and every room has to be “Hope-proofed.” But, very few things in my life have been so very worthwhile. I have had so much support from my family who share my passion, my other pets who knew from the start that the little dog with the wiggle didn’t mean any harm when she fell on top of them, or splashed water in their faces at the water bowl, or took the toy right out of their paws. They always let Hope win. They just know Hope.

Five months later Hope has amazed everyone. She now can climb six steps and go down the same six, not unassisted, but she can do it. She can chase a ball and bring it back to you. It may take a while, and she may miss it a few times, who cares. She continues to win every game of tug-of war. She now drinks her water like a big girl and has learned to sit. Forward, backward, forward, sideways, and then sit. She always does more than you ask her, and much more than you could ever expect from her. She has given me back so much more than I could every possibly give her. She has taught me patience and determination. Most of all, she has taught me all about Hope.

As an addendum to this story I must add that Hope was made available for adoption the whole time she was with me. I kept up the search and Hope became a national stigma for what rescue is all about, and what these amazing little animals can do. While searching I realized that my life was never going to be the same as long as I had Hope, but then again, I knew my life would never be the same without her. We officially adopted Hope, and she will be with us forever. She will always be the reason my family will stay forever involved in rescue, and forever hold on to our Hope.

President and Founder
Alabama Pug Rescue and Adoption, Inc.
1998
“A Place for Hope